“Buy now, pay later” services are becoming a popular payment method due to low barriers to entry and ease of use. But does flexibility come at a price?

More Singaporeans are opting for “buy now, pay later” (BNPL) services, which allow buyers to defer or spread out payments for purchases interest-free.

About 38 per cent of consumers have used a BNPL service, according to a report in October last year by financial comparison platform Finder that surveyed more than 1,000 Singaporeans aged 16 and above.

The payment option is especially popular among millennial consumers. Some 44 per cent of those aged between 25 and 34 have used a BNPL service — the highest among the age groups polled.

A number of factors may be driving interest in these payment services.

Most users do not have to pay annual or interest fees. Applying for an account with a BNPL service is also fuss-free; users are able to create an account if they are above 18 with a debit or credit card and enjoy instant application approvals.

Home-grown fintech startup, Rely, was the first to offer BNPL services in Singapore in 2017. Since then, other players such as Atome, hoolah, OctiFi, Pace and, most recently, Grab have entered the market.

But are interest-free post-payments trouble-free? What are the pitfalls?

“With no monitoring and no proper repayment schedules, the debt could turn into a problem,” she says.

Established in 2004, CCS is a registered charity that assists individuals and small businesses with debt management through financial counselling services and educational programmes.

Still, Ms Tan shares that BNPL services can be useful in certain situations.

“If the purchase is important and urgent, BNPL could help meet a need by stretching out the repayments via monthly instalments.”

Launched in December last year, PayLater is available to Grab users above the age of 21 who have made at least three GrabPay transactions within the last month.

Both PayLater options can be used at over 250 online partner merchants, including furniture retailer HipVan and gaming chair maker Secretlab.

Over the last year, we have observed several trends such as the adoption of cashless payments due to safety concerns during this pandemic, as well as the e-commerce boom across South-east Asia, as more people are staying at home and spending more time online.
MR LIM KELL JAY, HEAD, GRAB FINANCIAL GROUP SINGAPORE

While unable to share exact numbers, Grab says it has seen a growth in the number of PayLater activations. Most people use it for purchases above $100.

For Ms Vitya Vijayan, PayLater has proven useful in helping to manage her finances.

The 32-year-old account director of a digital media agency has been using GrabPay since 2019 to pay for rides and food orders.

Recently, she decided to give PayLater Instalments a try while shopping at HipVan.

“We had to replace our trash bin as it was small and old and bought a new one for $32,” says Ms Vitya, who paid for the item in $8 instalments across four months.

“It is a small amount. But for bigger ticket items in the $100 to $200 range, we can use PayLater Instalments without having to bust our monthly household budget.”

She and her husband have also started using PayLater Postpaid, which lets her track her monthly spending in-app, for a variety of Grab services that account for about 80 per cent of her monthly expenses.

“It would help to lower my monthly expenditure following a big purchase, as compared to seeing a large amount on my credit card bill at the end of the month.”

She says that the ease of setting up the PayLater feature on the Grab app was an added draw for her.

How BNPL compares to credit cards

Similar to credit cards, BNPL services give people a way to shop for what they want now and pay off their purchases over time. But there are differences between the two payment options.

For a start, unlike BNPL services, most credit cards charge an annual fee and late repayment fees plus interest on outstanding balances that roll over to the next billing cycle if repayments are not made. They also require credit checks, which can extend the application and approval process to three days or longer.

Such services also tend to offer lower credit limits than credit cards and are typically reserved for purchases between $100 and $1,000, such as jewellery, clothes and furniture. Grab says that spending limits on PayLater accounts vary based on factors such as the user’s spending habits.

Lower credit limits are one way of helping BNPL users like Ms Vitya ensure they are “nowhere close” to over-extending their finances. 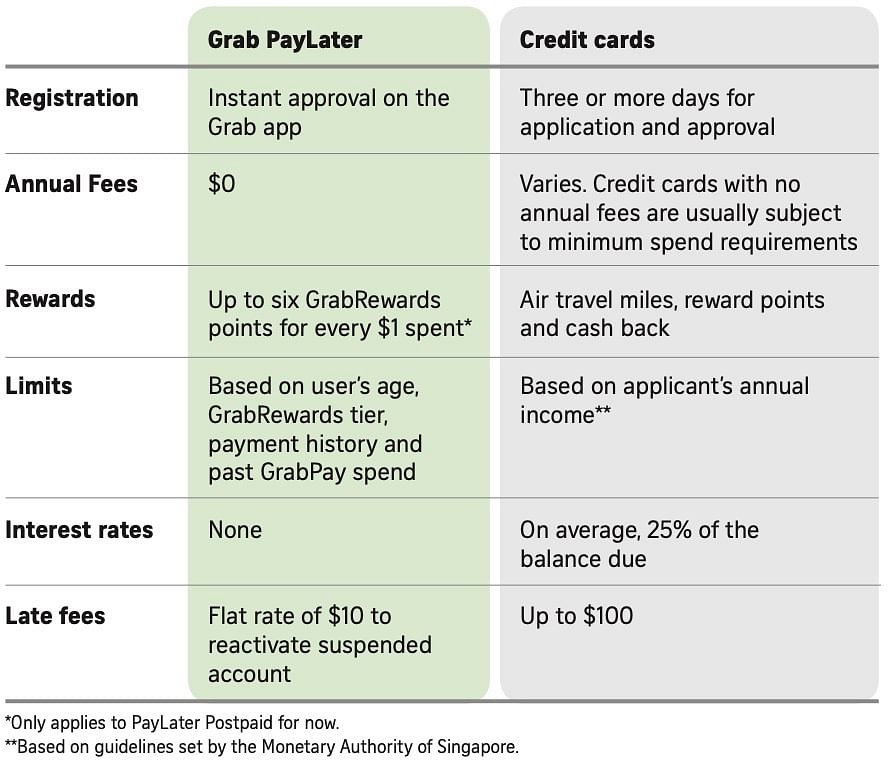 While BNPL services may be tempting for users seeking instant gratification, there are risks.

More than 27 per cent of BNPL users surveyed by Finder admitted to being worse off financially due to a BNPL mistake. Most said that being able to defer payments fuelled impulse buying and overspending.

The statistics are comparable to that of credit card users. OCBC Bank’s 2020 Financial Wellness Index found that 27 per cent were only paying the minimum sum on their credit card bills. The survey of 2,000 Singaporeans also revealed that 17 per cent were spending beyond their means to keep up with peers.

Some argue, however, that BNPL services may actually help consumers learn to be more responsible with their money.

“One of the advantages of tapping a ‘pay later’ service is that it can help consumers to manage their spending and cash flow better,” says Grab’s Mr Lim.

But this will work only if the consumer is able to exercise financial responsibility. He stresses that consumers should keep to a manageable budget and ensure they can balance their payments with other pre-existing instalment plans they may have.

“On Grab’s end, we support healthy spending behaviours by personalising our consumers’ spending limit, based on their profiles and payment practices,” he adds.

“If they miss a payment, no further transactions can go through until the payment is made. We also make it easy for them to stay on top of their finances through clear spend tracking and management within the app.”

For freelance web designer Ng Jia Xiang, PayLater is a means of getting by on an irregular income. The 36-year-old explains that the nature of his work means he sees less income trickle in over some months.

“It’s hard to foresee the number of projects that will come in on a monthly basis. Some months are busy, and others not so much.”

Mr Ng, who avoids credit cards because of their fees, is considering using PayLater to balance his purchases and cash flow.

For now, he has his sights set on a new chair from Secretlab. “With PayLater, I can take advantage of limited-time deals when the price is right for me.”

PayLater by Grab makes big-ticket purchases more affordable by splitting a bill across four months or deferring payment to the next month.

No fees, no fuss
There are no annual or interest fees for PayLater, which can be easily set up on the Grab app.

Interest-free instalments
No hidden charges. Whether you pay now, in the next month, or over four months, the total price of your purchase remains the same.

Stay on track
Monthly payments are automatically deducted from a user’s GrabPay wallet or linked credit or debit card if there is insufficient mobile wallet credit.

Users can also track their GrabPay expenses and payment dates on the Grab app, which sends notifications and bill reminders to users.

Missed a payment? Your PayLater account will be suspended if you have an overdue bill. Pay the amount due and a one-off flat charge of $10 to reactivate a suspended account.